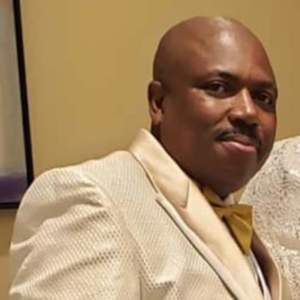 Minister Davon Richards
Minister Davon Richards was born in the quiet rural community of Lime Tree in the parish of Trelawny, Jamaica.
Davon attended the Lowe River All-Age School (now Lowe River Junior High). After completion, he went on to Spalding Secondary School (now Spalding High School) where he majored in electrical installation. After graduation, Davon’s search for employment took him to Ensom City, Spanish Town.
In 1986, Davon migrated to the United States. This transition created an array of opportunities for him including in the field of music. Not long after, Davon began to explore and develop his musical skills and in 1989 became a Disc Jockey. Over time, a skilled Davon would begin to employ and expand into the dance-hall and the night-club scene.
The beauty of Carol Lindsay could not provide enough comfort without proposing marriage, which reaped success for him in April of 2002. On this special night he also revealed that he got saved at Trinity Faith Pentecostal Church in the Bronx, New York.
In June 2006, Davon joined the Radio Ministries as a Gospel Disc Jockey. His incredible talent and hard work in the music arena earned him several awards including Radio Station of the Year, Best Radio Ministry and Radio Personality of the Year.
With the growing fame, new ideas and the love of God, in 2008 Davon formed the Brother Davon Ministries (BDM Radio). As the CEO of this institution, he carefully navigates the many challenges with confidence and the support of the amazing people with whom he surrounds himself.
In May 2014 he was ordained as a minister of the gospel. With his deep faith in God and continued devotion, he continues to impact and change lives.