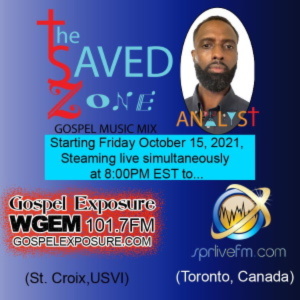 Reviving his listeners unto rejoicing and dancing is what you would find Jason Lloyd, known as DJ Analyst on the 1s & 2s, doing on a Friday night. Growing up in the Caribbean exposed him to all genres of music and now he has found his place as the host of The Saved Zone gospel music mix show.. Being a disc jockey was something he always wanted to do but he believed God never allowed it until he recommitted his life and delighted in Him. Being a radio show host would be the catalyst used to establish him to showcase gospel music live on air for the Glory of God. The "Best Gospel Media Personality 2021" was awarded to Dj Analyst by Maranatha Awards USA was his first public recognition.